When a little camera (Cannon) gets a "Communications Error" 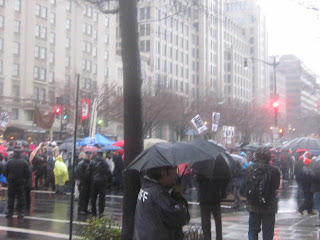 Today, when I returned from observing the “Take Back the Capitol” demos and tried to load my pictures and videos, I got a “communications error” on my Cannon Powershot, on all computers.
It turned out, as I gumshoed, that the problem occurs if you have “too many pictures” on your memory card, even if there is space left on it.  It was about 80% full (8 G) and had about 3000 pictures.  It sounds like one of those coding problems where a register fills up, or when you code out of addressability – based on my experience 20 years ago with IBM assembler.
So, the solution, the say, is to get a USB memory card reader, which did work just fine to recover the pictures and video.  Just a couple hours lost driving through the rain to Best Buy.  Oh, yes, it’s time to replace the little camera too.  The cheap ones are only good for about a year anyway.

At the end of 2010, a Nikon digital camera started giving IO errors after the USB connection, on all copies-from after the first one.  Perhaps this is a variation of the same software problem.
I’ve heard a lot of moralizing on the Occupy movement.  We could say it is a natural result of hyperindividualism.   We can’t sustain prosperity just by politicking and hucksterism.  I’m all for protesting the over-influence of “professional” lobbyists.  It’s not a job I would want.
Posted by Bill Boushka at 5:23 PM