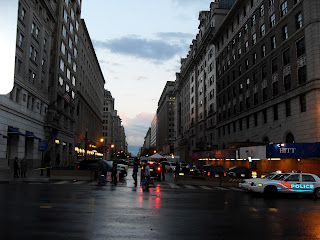 It’s hard to imagine how a liability case against a former attorney general of the United States regarding 9/11 could have much bearing on the job market, but the question of personal liability for activities carried out on the job could be troubling.
The story about Ashcroft appears on p A16 of the Washington Post March 3, and is by Robert Barnes, with link here. In this case, there is a question as to whether a lawsuit against former Attorney General Robert Ashcroft as a person can go forward based on his activities on the job as an employee (although an "officer" or cabinet member) of the United States Government. .
Usually, the punishment for questionable conduct on the job is termination. But in some cases people can be prosecuted for crimes committed while trying to do their jobs, to make quotas (such as gaining access to a residence), and in extreme cases, judgments might be assessed against individuals as well as their employers.  In the words of the novel “Marathon Man”, no, “is isn’t safe”, not completely.
People who work in phone banks and have quotas for performance (debt collectors, sales) could conceivably face risks like this. There may be more risk in jobs that are “unpopular” and raise questions as to why the individual “took the job” in the minds of others.  (Can’t he or she do something else for a living?)  One time when I was working selling subscriptions (2003), I was “threatened” and decided to quit after six weeks on a low-paying job.  And it’s not fun to be told off on the phone as if your performing the job were evidence of a personal character problem.
Another obvious risk area: if someone tending bar serves alcohol to someone becoming inebriated and allows the person to drive home.  Bouncers will remove someone incapacitated from a bar but not stop them from driving home. Could that become a “personal liability”?
Relevant concepts would include the status of a company as an LLP on the one hand, and whether one is an "officer" on the other. Bolton has an article in its "Hot Topics" series, "Personal liability for officers and directors of private corporations", link here. Tech Republic has had articles before on liability insurance for IT contractors.  This topic seems like the proverbial iceberg than sunk the Titanic.
Posted by Bill Boushka at 6:42 AM