Recalling a 2003 interview with Primerica 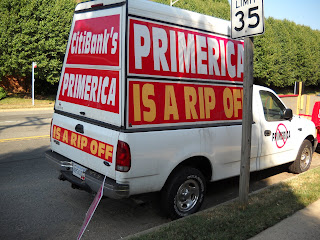 Back in 2003 I was approached at a job fair in Minnesota to consider becoming an agent for Primerica, which has the slogan “buy term and invest the difference”, as at this “our story” link. (It's "Primerica", not "Primamerica".)

True, the sales pitch was getting people to convert from whole life to term, and the agent who presented it to me one April morning near I-494 in Bloomington was unsettled by the questions I kept asking, and became defensive as he said I wasn’t a good fit. (He had claimed there was a $40 trillion potential market to milk for commissions.) “We give you the words,” he said.  (That was an odd thing to see to a writer or author capable or originating the words.)  It sounds like the old dichotomy between “winning arguments” and “winning converts.”

I had actually gotten a call from them on Sept. 13, 2001, while I was still working for ING in I.T. (I would be laid off Dec. 13, keeping my job for 92 days after 9/11). I thought that was odd then.  Was it a sign of what was to come, a way for me to pay my dues after the purification? I think they mentioned affiliation with Citibank and said they were “expanding”, and odd time to do so.

So, yesterday, driving on Old Dominion Drive in McClean, VA, I see this truck, shown here. And here is a web link to back that sign up.
Posted by Bill Boushka at 6:25 AM

That article is ridiculous....that wouldn't happen. And...if that was the case, why would he continue to pay such high premiums. Your premiums do not change for the life of the policy. Also, is he a business owner? Key insurance policies are owned by companies, not individuals. People post anything and we're so quick to believe it.

True, key policies are usually owned by employers. It would seem logical that employers would prefer term because it is cheaper.

I think this company wanted aggressive sales people to approach individuals about conversion. They saw a "killing". I think there is a problem in that our whole economy is turning to hucksterism because we don't do enough for ourselves at home and depend too much on underpaid labor overseas. Call it bad karma.