Layoffs: the stuff of screenplays 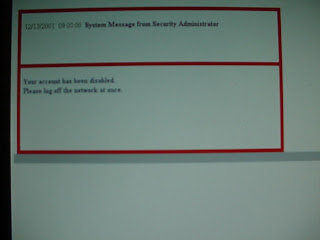 I recall the day that my own conventional information technology career experienced its cardiac arrest. On Thursday, December 13, 2001, I received a message like the one shown above (simulated) through Netware from the company’s security department. I was talking to a client and solving a problem, and continued the conversation. I logged off as requested, and found I could not log on. I called the help desk. They said they would check. Then, at 9:10 my manager stood next to my cubicle and said, “Bill, we have a meeting.”

I was prepared. I had already figured out what severance was due, and I was correct to the penny. I could come back to my desk and stayed on the payroll formally through Dec. 31, but I never got access again. The same thing happened to thirteen other people that morning. When I got back to my desk, I got a call from the help desk saying that my account really was disabled.

We had been told by email Monday that we all had to be in the office that day for “an important announcement” about reorganization. That’s a tip off.

In fact, I had experienced difficulty logging on the evening before.

T.M. Shine has an amusing tale of his own layoff in The Washington Post Magazine today, on p 10, “Terminated: Desperately seeking Plan B”, link here.
The link "Dispatches from a Victim of the New American Reality" for his public discussion (with reader questions) at the Post will be here.

He was laid off while at lunch. He talks about people not being allowed to go back to their desks. His "Shine Time" Blogger site is here. He is getting a lot of comments (including mine.)

I’ve heard of other office tales. In one case, people said, “I want to go next.” The boss said, if you have another job, don’t quit first (so you get severance).

In a suburb of Minneapolis, Prudential had a mass layoff on Feb. 4, 1999 of its IT department, whose functions were to be taken over in Newark NJ. That sounds like a strange thing to do before Y2K. The tipoff was that when people came to work, even as early as 6 AM, nobody could log on. “We knew,” one staffer said. The announcement came about 9:30. Then they went out to Applebees.

The New York Times Business section has a featured story by Sarah Kershaw, “Wall Street Exodus: Fear, Panic and Anger”, link here. This time the layoffs seem to be quiet and stealthy. Many times the “extended” severance agreements include not only a “release of all claims” (an agreement not to sue) but also an agreement not to disparage the company publicly or sometimes disclose the severance. Sometimes non-compete agreements are still enforced by severance agreements.

Visitors may enjoy Heather Armstrong's account of her being "dooced" (fired because of a personal website) here. At least her accounts touch this subject tangentially.

“A certain scientist, Galileo’s contemporary, was no more stupid than Galileo. He knew that the earth revolves, but he had a family. And when he got into a carriage with his wife, after accomplishing his betrayal, he reckoned he was advancing his career, but in fact he’d wrecked it.” Yevtushenko, “A Career,” text for last movement of Shostakovich Symphony #13, London CD 17261.
Posted by Bill Boushka at 6:18 PM