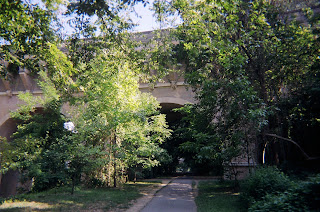 In 1979 I left New York City after four and a half very interesting years living in Greenwich Village, for Dallas, working for the Combined A&B Medicare Consortium (“CABCO”) of (then) six Blue Cross and Blue Shield plans around the country. “The Project” was supposed to develop a state-of-the-art Medicare claims processing and reporting system, competing with EDS (a circumstance that created an immediate conflict for the host Texas plan). That would start an interesting 9-1/2 year period in Dallas, some of the personal aspects of which I have discussed on other blogs.

I written in some detail about what happened there, especially on Nov. 13, 2006 (“End User Computing Flexibility”), March 27, and July 16. We used a system development system from M. Bryce Associates called “Pride-Logik” that tended to control the development process and run the show. The project manager had a sign in front of his office in the Zale Building (in 1980 it moved up Stemmons a bit) “Abandon All Ye Who Enter Here.” He had a certain style of Zen management that did not reign on the political and turf battles of the six plans. That led to the failure of the project after three years of running around in circles. This was harmful, as I spent close to three years with some good design experience (IMS and CICS, the staples of the time), but we never implemented. We did hire “programmers” near the end who coded a few reporting modules under my supervision – that was another thing, we had a division between “analysts” and “programmers” which may seem passé today – except that today analysts would be called “architects” and would often be coordinating work done by programmers overseas. Had the project succeeded, I did intend to “move up” because IMS and CICS was considered a competitive production work environment by the job market standards of the day.

There was one particular incident in June, 1981 (I left in October, seeing “the handwriting on the wall” – the project folded at the end of January 1982) that teaches a lesson oddly relevant to today. We had been writing pseudocode (as part of
“Phase 4”) and had gotten a small inhouse mainframe (a 3330 I think – at the time a big deal). We had a crude TSO system (I don’t think we had ISPF, and certainly not Roscoe) and I had saved some bits of pseudocode on a dataset for reuse in various specifications. One day in June a “librarian” pulled off all of our work and gave it to others to “review.” I had not intended that dataset to be “public” and was shocked when people thought I had handed in “junk” work. It was supposed to be a private work dataset, much like a private word document on a home PC (and not published to the Internet). Or perhaps it was analogous to an element on a social networking profile not published to the world but whitelisted to a known list, but that still “gets out.” In those days, people worked with paper and pencil a lot (we hand-drew system flowcharts and structure charts, long before the days of Visio), and logging on to “the system” implied a bit of a commitment. But actually, the MMIS system at Bradford in NYC where I had worked 1977-1978 had been more advanced, with Roscoe and individual office rooms, but still a “tube city.”
Posted by Bill Boushka at 1:44 PM