Microsoft "forces" me to go to Windows 10 suddenly on my travel computer; what if I had to catch a plane and had no time? 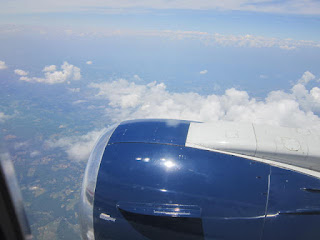 Well, today, on a Toshiba satellite, Microsoft warned me with it would install Windows 10 in 3 minutes right as I signed on (replacing 8.1), and I wasn’t able to stop it.

It restarted the machine.  The entire process took about 85 minutes.  It seemed to wait a long time at 92% and 69% on the driver installs. 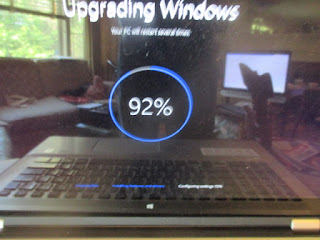 There was a lot of waiting, and more messages, but finally everything came back.  The first time I cold started was slow, and the first restart was slow, but a second start was more normal in time. 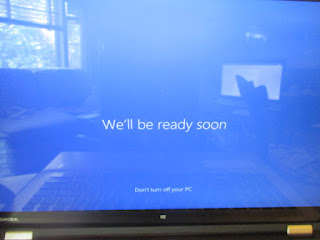 Still, there is a problem with Microsoft doing this.  What if I had to catch a flight and depend on the computer for a business trip that day?

The New York Times purports to answer my questions in New York Times Tech Fix, "Why Windows 10 Upgrades Go Wrong, and How to Avoid It" (p. B6, Business Day, May 19).  Cheaper laptops may not have upwardly compatible device drivers.

Posted by Bill Boushka at 9:03 PM No comments:

Federal government waking up to "agile systems methodology" for health care, FBI, burned by SLDC debacles in the past 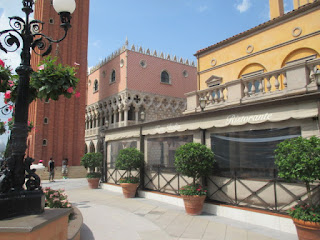 Timothy B. Lee has an interesting article on Vox explaining how the federal government and Obama administration is reforming its information technology management at critical agencies, most of all the FBI and HHS.  The 2013 “Healthcare.gov” rollout catastrophe may have been the last straw, and it came rather late.

Lee discusses a project management technique called “agile software development”, whereby users deliver definite capabilities to users live and then reiterate to fine tune the products based on user feedback.  This seems to be a departure from the old SDLC, or “systems development life cycle”, with which familiarity was so essential to job interviews in the past, most of all the 1980s and 1990s, as Y2K approached and as mainframe had to integrate with Internet and other end user GUI platforms.

Source Seek has a discussion of agile methodology and refers whimsically to the “manifestos” out there on software development, and everything else.  “Agile” means “iterative” (and “streamlined” and “timeboxed”) rather than the “waterfall” or “blueprint” technique.  Ever heard the mantrum, “no more changes”?  I have (below), but agile loves change.

The older ideas were certainly in full boil when I worked for a Blue Cross and Blue Shield Consortium, “CABCO” in Dallas from 1979-1981. We depended on various “phases” with walkthroughs (or prototype simulations, as Lee describes), pseudocode, steering committee meetings, CEO meetings, in a repetitive cycle.  The project eventually failed because of squabbling over turf among the plans, when the right concept was to let the end users (affected by conditions and local laws in different states) input many of their requirements, an idea already getting traction in the mainframe world (with CICS interfaces) by the mid and late 1970s.

The skill of the people hired is also maybe an issue.  The transition from old school procedural (often mainframe in verbose languages like COBOL) programming to OOP is not simple for older workers, who need the opportunity to build things from the ground up, not jump in and maintain what other people did.  But there was also a tendency for many “mature” mainframe professionals to leave and go do something else (as I did) after Y2K and then the shock of 9/11.  The recruiting industry and the way contracting firms did projects – with temporary W2 gigs – did not encourage retaining the level of maturity needed to put in a system like “Obamacare” with all its complexities, many of which were oversights in policy as well as technology.

I could have contributed materially to the development of “Obamacare”.  But if I had anything to do with it at a senior level, it would not have gone in with all the problems it had, and I would have squawked about the idea of people paying more under the new system than old, partly because of being forced to buy coverages they personally didn’t need. Maybe that wouldn’t have been my call – but I think nobody could see (or simulate) how this could happen technically.

Of course, talk is cheap, and free.

Posted by Bill Boushka at 2:24 PM No comments:

Lowballing by salaried workers could undermine parental leave for others 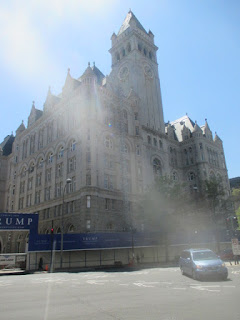 Take note today of the Letters to the Editors on the April 10 article in the New York Times (posting here) on digital sweatshops, most of all the letter by Vogel, links.

The letter writer essentially describes the practice of lowballing by salaried workers, especially those with fewer family obligations, making themselves effectively cheaper to keep if there is a downturn. It’s hard to imagine how “paid parental leave” can coexist with this practice.  I remember the use of the term “lowballing” all the way back to the early 1970s when I worked on benchmarks for Univac.

Posted by Bill Boushka at 7:12 PM No comments:

Do Microsoft users have a "fundamental right" to stability so they can do their work? Some discussion of product lifecycles 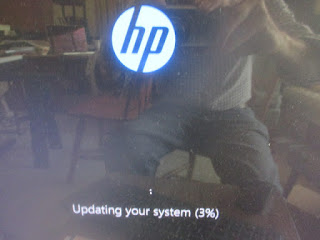 Do home users and small business owners, and especially would-be journalists have a fundamental right to expect the devices (most of all traditional PC’s, whether Microsoft, Mac, or some other Linux, as well as tablets and smart phones) to be reliable without breakdowns caused by vendor adventureness?

Today I had some misadventures with a Windows 10 “Second Tuesday” update.  One restart got caught in a loop, which I got out of by repowering the machine.  The “Advanced options” tells me one more restart is needed to finish updates, but another screen says they are up to date.  A symptom was Microsoft Word not loading, which would always be fixed by a restart (or even a power off and Windows 10 fast start).

Microsoft, especially, seems to think it has the right to disrupt customer work by scheduling Windows 10 upgrades on older machines with 7 or 8, which are very likely to fail.

Furthermore, on Windows 7, it seems that “checking for updates” gets caught in a loop now, even though essential security support is supposed to continue until 2020.


I see a lot of troubleshooting forums, with widely varying answers to problems, with people who seem to have time to rebuild operating systems and drivers al the time.  How do you get business done if your basic infrastructure is unstable?  Yet, I’ve heard the moral view expressed that every computer owners should be able to rebuild his own operating system from scratch.  It’s like saying car owners and homeowners should be able to do their own repairs. It’s rather Maoist.

With the Mac, I have fewer stability problems, although I can't say the Mac is perfect.  More about that another time.

Posted by Bill Boushka at 12:52 PM No comments:

What are the "hot" programming languages now? Also, life in a digital sweat shop 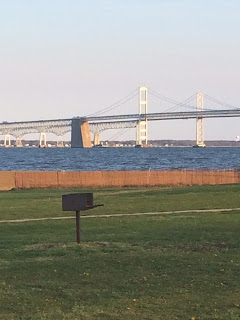 Business Insider has a list of eight in-demand programming languages.  Java is no surprise (despite the security concerns that keep if from being offered with many hosting plans). It’s amazing how java rose from release in 1995 to being a productions staple by 2000.  C# is easier, but limited to Microsoft .Net environments pretty much. C++ requires real coding.  But seeing Python and especially “Ruby on Rails” (used at Twitter and Airbnb) surprised me. 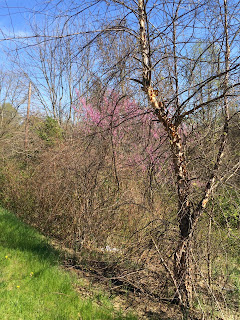 Dan Lyons has a whimsical op-ed in the New York Times Review, “Congratulations, you’ve been fired”, about an experience at Hub Spot, a discussion of a digital sweat shop where a gig of employment is like a “tour of duty”,  But isn’t this what agencies offering W-2 contracts specialize in?
Posted by Bill Boushka at 8:19 PM No comments: 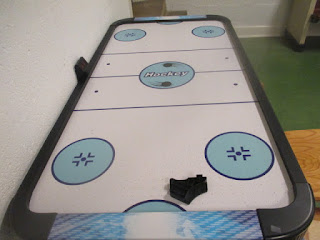 How rude of Microsoft!  On my 2009 Dell XPS, which I still use for legacy purposes, Microsoft is now trying to schedule my Windows 10 upgrade at a specific time!

I have work to get done, and can’t afford to let Microsoft take over the machine for a few hours and probably leave it unusable with instability.  This seems particularly unwise on an old machine. 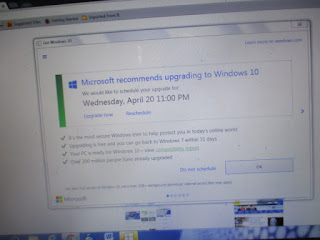 It does appear that Microsoft lets you opt out of the auto-scheduling.
Posted by Bill Boushka at 7:50 AM No comments:

San Francisco passes paid parental leave; does it require a premium payment? What about non-parents? 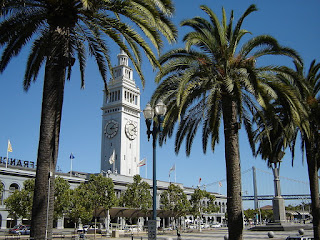 San Francisco has approved a measure requiring businesses to offer at least six weeks of paid parental leave.  The latest story in the San Francisco Chronicle is here.

The state of California already has a plan for its workers, which it supports with a small insurance premium on all payrolls.  The news reports do not indicate that a premium will be charged in private business insurance.

Similar laws have been proposed in Washington DC, but would require payment of 1% of wage as a family leave insurance premium.

Progressive companies, especially high-tech, have generally offered even more generous benefits, largely out of self interest. Mark Zuckerberg made a spectacle over taking two months of paternal leave when his daughter was born (and his wife is a physician herself).

The issue is more sensitive in an exempt, salaried workplace than with hourly (or with contractors) because other employees often wind up taking over more workloads, especially being on-call, for free.

I strongly support the idea of a minimal payroll insurance premium deduction so that people are conscious of how this is paid for.  (Bernie Sanders talks about the benefit in the rest of the western world, but doesn’t say how to pay for it.)  The deduction could be mildly progressive and waived for the lowest income workers.  Actually, progressive health insurance premiums may be a good idea.

When I worked for Univac in the early 1970s, Univac made the payroll deduction for the employee’s portion of the health insurance premium progressive based on salary.

It’s also important that fathers have access to the benefit as well as mothers (which they do in California.)  It would be possible to consider some benefit for eldercare as well, but that would require charging more premium. But an eldercare benefit would mean that non-parents would have a better chance to use the benefit, making it “fairer”.

Wikipedia attribution link for picture of Ferry Building, p.d., by “DaveOinSanFrancisco”
Posted by Bill Boushka at 9:32 AM No comments: