Is the mainframe back? Are benched programmers to be welcomed back? 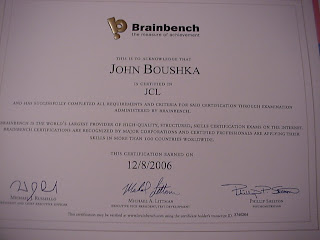 Bob Weinstein 's column "Tech Watch" in the "Recruitment Times" of the March 5, 2007 The Washington Times, is titled "The Mainframe Is Back." Weinstein maintains that the IBM mainframe (complete with MVS to OS-390, JCL, TSO/ISPF, batch cycles, CICS, IMS, DB2, RACF, and the comfy old conservative computing culture in large companies surrounding it) is back. After the 2001 recession, 9/11 attacks and scandals, it took a real dip, but it never went away. Now, a lot of programmers with these skills are older (often in their 50s and even 60s like me) and many "dropped out" during the blood letting, where companies merged and consolidated data centers, or sent a lot of maintenance work, including night time production batch cycle support (fixing SOC7's, etc) overseas. Some work is coming back, and demand has been increasing in recent months. To stay in perspective, remember that Bob Weinstein had written a similar column in April 2002, predicting the return of the mainframe -- I remember the column in the Minneapolis papers, and outplacement companies then chuckled at the "ray of hope."

I have noticed this. Two years ago, most of the gigs required very specific skill sets, and favored professionals who had stuck with a narrow skill set to become "experts" rather than job hopping for new exposure, which had happened so much in the 90s. Particularly desired were in depth Medicaid MMIS -- but you needed five years minimum to be considered -- also, DB2 or IMS internals, and Case Tools, that seem to be used a lot with welfare and social services systems run by states. There was a Catch-22. Because generally IMS is a low-demand area, few people will stay in it, so a company in bad need of support scours the country or the world for narrow expertise.

In the 1980s IBM mainframe had a lock on major companies, with the prevailing shop culture being CICS as the teleprocessing monitor (with its whole world of Meta COBOL programming conventions, especially revolving around pseudo-conversational processing) and IMS as the database. (There was also a IMS-DC, sometimes seen. Also ADR Datacomm had a DB and DC, which were simpler, and which I learned at Chilton Credit Reporting in Dallas in the 1980s; I would not get back to CICS until 1990, starting with ALC Macro. DB2 and SQL started becoming significant in the late 1980s. The culture of large mainframe computing in financial institutions or insurance companies tends to emphasize huge numbers of transactions with history, and favors cursor or record or row processing instead of the set processing preferred on the Web.)

Since mid 2006 the gigs have tended to become broader and less demanding of very narrowly defined skill sets, and that suggests that companies would like some of us to come back. And just recently, companies seem to be more likely to ask for in-person interviews rather than phone screenings, which indicates that they believe that the need for employees to live in corporate apartments in new cities (under a W-2 rate or corp-to-corp) may be less critical than a couple years ago. (By the way, there are tax rules here -- check with an advisor, although many contracts have to be written as less thab 365 days. Brainbench test certifications can help reestablish a professional's credibility. (Look in the "Test Center" in the "Skills Center" on the left hand side of the log on page.) My certifications (now COBOL II, JCL, SQL) can be reached by linking from here (the transcript link is at the bottom).

Recruiters say that you don't forget COBOL and skills like TSO/ISPF. IBM mainframe JCL had a reputation of being difficult, but it still quickly became second nature for me. IBM is reported to be working on making it simpler, with abbreviated forms more like Unix (or perhaps the greatest mainframe JCL of all -- the obsolete Univac 1108 Exec 8 -- remember that? It was very logical! -- all the way back to the days of Nixon and Ford, and those days of benchmarks at the Univac facility on Pilot Knob Road -- or was it Yankee Doodle? -- in Eagan, MN, near St Paul. Those were the days, my friend)